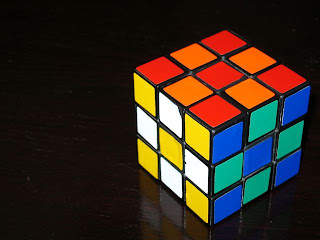 So, perhaps you've decided to participate in Nanowrimo. Or you've just been struck with a new story idea, and you'd like to see if it has what it takes to become a novel. Maybe you've got a story partly or completely written, and you wonder if you've left out something important.


I've got the perfect thing.


This plotting method has been discussed widely over at Verla Kay's Message Board. If you have not been there, you absolutely need to check it out. It is not clear who came up with it first.


Sometimes it's called the 9 Steps for Plotting Fiction, or the Plotting Matrix. Since this plotting method starts with nine squares, and since this year is the 30th birthday of the Rubik's Cube, I'll just call it Rubik's Cube Plotting.

To start this process, take a sheet of paper and draw nine boxes, like one side of a Rubik's Cube. Number the boxes starting at the top left (1,2,3). The second row will be 4,5,6 (left to right), and the bottom row will be 7,8,9. (Scroll to the bottom of the post for a link to a great printable sheet with all the info)

The following descriptions of the contents of each box comes from this page on Verla Kay's site.

First thing's first. What happens? Why have you bothered to write a book, and more importantly, why should a reader invest time flipping through its pages. Your triggering event is the answer to those
questions, so make it a good one. Also, don't make the reader wait very long for it. First page, first paragraph, first sentence. These are good spots for a triggering event.

Generally, books succeed or fail on the strength of their characters more so than on the strength of their plots. The second box is where you explore what makes your protagonist tick. No, this isn't an excuse for drawn out exposition, history, or back story. If your triggering event is captivating, the reader will discover enough about the protagonist in Box Two simply by reading how he or she reacts to the event.

By now, your plot is picking up steam, and because of Box Two, the reader is invested in the ride. Time to throw a curve ball. This turning point can be either a positive event for your protagonist, or a negative one, but it should lay the groundwork for the negative turning point in the sixth square. There is a reason these boxes are touching one another; they interrelate. For example, Box Three may introduce the motivation of the antagonist, which then justifies the events in the sixth square.

You've earned some time to fill the reader in on important data. Since this box touches the first square, here's where you shed some light on that triggering event. Since it also touches Box Seven, you get to foreshadow your protagonist's darkest hour. Box Four often reveals a relationship, character flaw, or personal history that contributes to the dark times in ahead.

Here is where many plots fall apart. Box Five represents the trickiest part of fiction and since Box Five is the center of the book it must connect to all the squares around it. Kind of like the nucleus at the center of a bomb, Box Five should tick systematically upon elements introduced in Box Two and Four. And like the calm before the storm, the fifth square should give the false impression of resolution before heading like a freight train to Box Six. Most importantly, it needs to provide foreshadowing for the protagonist's revelation in Box Eight. That's a lot for a little box to do, but focus on efficient prose to get it right. Your plot depends upon it.

Here's where that bomb explodes and all (word censored) breaks loose. Good thing you laid the groundwork in Box Three. Good thing, too, that Box Nine will deliver some just desserts.

The protagonist is defeated here, and the antagonist apparently wins. How the protagonist deals with the darkest hour of defeat depend upon the traits and/or story developed in Box Four, which leads to his or her revelation in the next square.

Of course! The protagonist's revelation turns the tide. Here is where the protagonist connects the dots and overcomes the obstacles of Boxes Six and Seven via the device introduced in Box Five.

The negative turning point in Box Six is rectified while the character's resolve from Box Eight is brought into full bloom. Congratulations! Another great tale told greatly.


Amazing, isn't it? Your whole story in nine little boxes. A great visual of the entire plot, and how each part relates to the others. If, like me, you'd like to see this in a diagram, there's a great one here (note: this is a .pdf file), made by one of the members of Verla Kay's site. I highly recommend this download. It's only one sheet, but the writer includes arrows showing the relationship of one box to another, and incorporates the Hero's Journey and the three-act structure.


This method helped me discover some holes in my plot, and made me realize I needed to deepen some character motivation. Give it a look. I'd love to know what you think.
Posted by Debbie Maxwell Allen at 9:07 AM