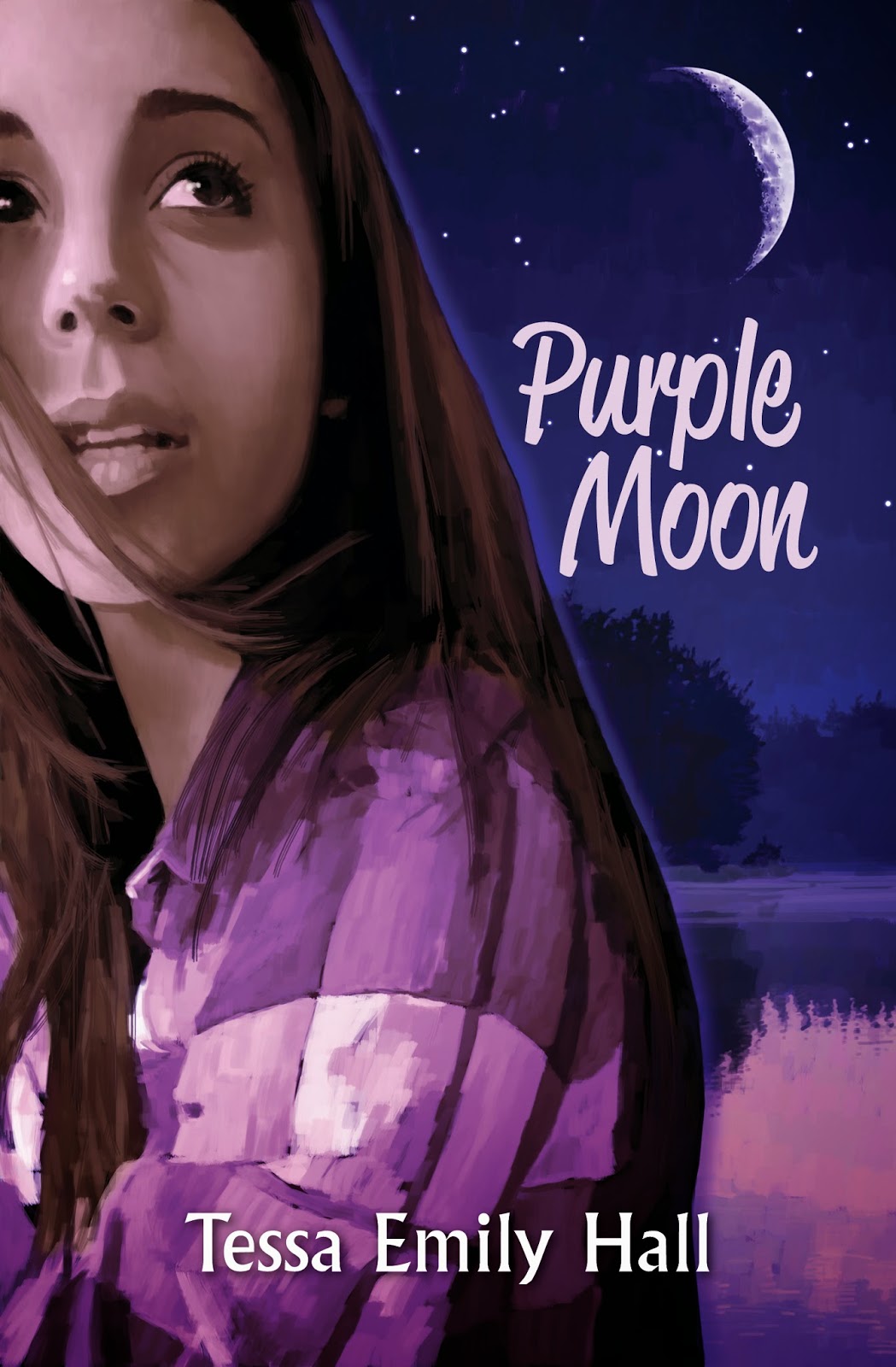 It's always fun to meet folks via their blogs. Tessa is one cyber friend that inspires me. She's a teen writer who has worked hard--and her novel, Purple Moon has just published! Don't forget to check out the giveaway at the bottom of the post.

First, here's the back cover copy:


Selena's life isn't turning out to be the fairy tale she imagined as a kid. That hope seemed to vanish long ago when her dad kicked her and her mom out of the house. This summer might finally hold the chance of a new beginning for Selena ... but having to live with her snobby cousin in Lake Lure, NC while waiting for her mom to get out of rehab wasn't how Selena was planning on spending her summer. She soon begins to wonder why she committed to give up her "bad habits" for this.

Things don't seem too bad, though. Especially when Selena gains the attention of the cute neighbor next door. But when her best friend back home in Brooklyn desperately needs her, a secret that's been hidden from Selena for years is revealed, and when she becomes a target for one of her cousin's nasty pranks, she finds herself having to face the scars from her past and the memories that come along with them. Will she follow her mom's example in running away, or trust that God still has a fairy tale life written just for her?


Tessa is stopping by today to answer some questions about her journey to publication. Listen in:

DMA: Can you give a brief overview of your path to publication?

Tessa: I’ve always loved writing, ever since I was in preschool. I never really had a doubt I would become published one day either—not necessarily because I thought I was talented, but because I really felt that writing was my calling in life. I didn’t have a desire to do anything else. So once I reached high school, I decided to take an online school so I could have more time to pursue writing. I wasn’t necessarily trying to seek publication—I started off mainly just studying the craft and trying to incorporate writing into my school schedule. I bought several books on the writing craft, took a creative writing class through my online school, and took a course through the Christian Writers Guild as well. I was fifteen when I began to write “Purple Moon”, and I completed it when I was sixteen. It was also during my sophomore year in high school when my parents agreed to let me attend a Christian writer’s conference, which wasn’t too far from where we lived (Blue Ridge Mountain Christian Writers Conference). It was there that I met Eddie Jones, the acquisitions editor for Lighthouse Publishing of the Carolinas. After showing much interest in “Purple Moon”, Eddie asked for me to email him the rest of the story. Eventually—a few months later—he ended up offering me a contract. =)

DMA: What do you feel were some of the things you did 'right' as a pre-published author? (i.e. critique groups, conferences, contests, etc.)

Tessa: I’ll start off by saying what I did wrong, and that was the fact that I didn’t enter any contests or join a critique group. I did, however, attend Blue Ridge Mountain Christian Writers Conference. Obviously, that paid off very well. =) I’ve attended five more conferences since then, have learned so much at every single one of them, and have met some incredible people there as well. I’m also very glad that I decided to start studying the craft of writing when I was fifteen. I started my blog when I was sixteen which was great—because not only did I force myself to write on it three times a week, but I also met other writers from around the world (including you!). I was also able to build a following and a brand, both of which have paid off tremendously.

DMA: Did your young age factor into publication in a negative or positive way? Or was it a non-issue?

Tessa: Oh, it definitely did! I’ve had a few people (professionals in the industry) who had advised that I waited until I was “more experienced” and in my late twenties before pursuing publication. One of them also said that she wouldn’t advise that I pursue writing at all, only because it involves so much work and is not as glamorous as it appears. I understand why people are so against teenagers pursuing publication—it’s because they believe that teens’ writing isn’t quite developed enough. They also don’t think it’s fair that a teenager might find publication way sooner than an adult would, simply because of their age. One author even told me that many teens who do find success in the publishing world eventually fade from the spotlight as they become older—therefore, being published as a teen eventually becomes negative for that person rather than positive. I don’t think a person’s age should be a factor at all, but instead the person’s talent and experience. Besides, there are many teens whose writing is actually far beyond their age.

My mom has attended every writing conference with me that I’ve been to. And at almost every one of them, I’ve been the only teenager there—so naturally, people would think that my mom was the writer and I was only with her for support. But when they realized that it was the other way around, almost all of them would treat me with respect rather than looking down on me. That has always been really nice to witness, especially since there are so many adults who try to discourage teens from pursuing publication.

DMA: Give us an idea of what Purple Moon is about.

Tessa: “Purple Moon” is about a 16-year-old girl who is forced to stay at her snobby cousin’s lake house for the summer while her mom gets treatment in rehab. It’s a character-driven book, following Selena’s journey throughout that summer. I’m hoping it’ll become the first in a three book series.

DMA: How did you come up with your main character?

Tessa: Selena was sort of based on a combination of people that I know. I’m not saying that I wrote her with certain people in mind, but that I have witnessed so many people in my own life who have started out as a “good person”, but eventually started falling away from the Lord when they became a teenager. It’s always been difficult for me to witness these people start making bad decisions, only because I know how good of a person that they really are. They just might not know how to deal with the issues that they’re facing. I wanted Selena to represent those kind of people, and to show them that there is hope—that God still loves them, despite the mistakes that they’ve made, and that He has the power to turn things around. I’ve also given Selena many of my own qualities as well. For instance, she’s a dreamer, introvert, an artist, coffee-drinker, wears the same style of clothing as I do, etc.

DMA: Describe your writing process, and how you balance writing and school.

Tessa: I am now a sophomore in college and am taking a semester off school in order to promote “Purple Moon”. But when I did an online school my first three years of high school, I would usually wake up early and get my writing done first, then begin my schooling. (I always feel most inspired in the mornings. Plus, I almost always have to drink coffee while I write. =) When I attended school my senior year of high school, I would wake up very early to write for an hour. I’ve been doing the same in college as well.

DMA: Thank you so much for coming by! It's so encouraging to see a writer achieving success.

Tessa Emily Hall is a 19-year-old author of Purple Moon, her YA Christian fiction novel to be published September 2013 by Lighthouse Publishing of the Carolinas. She is also the editor over the faith department for Temperance Magazine, a column writer for Whole Magazine, a contributing writer for More To Be, as well as the PR for God of Moses Entertainment. Other than writing, Tessa enjoys acting, music, Starbucks, and her Teacup Shih Tzu—who is named Brewer after a character in her book, as well as her love for coffee.
Website:  www.tessaemilyhall.com
Blog: www.christiswrite.blogspot.com
Twitter: www.twitter.com/tessaemily
Facebook: www.facebook.com/tessa.h16

a Rafflecopter giveaway
Posted by Debbie Maxwell Allen at 6:00 AM 6 comments: Links to this post