Sample of The Unspoken

This is Chapter 1 of The Unspoken, an exclusive novella for my newsletter list.
Coming June 2020. Enjoy! 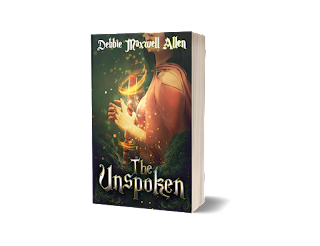 Hiding is the surest way to be found out.
~The Traveler

The sailor spotted her behind a weathered barrel on the deck, hunched small on a rolled piece of canvas.

Ionna caught her breath, skin prickling. She gripped the staff in her hands so tightly blood pounded in her fingers. The staff could serve as a weapon if need be.

The sailor’s skin was dark everywhere. Darker than the ebony trees in the forest near her village. His tightly-curled hair was graying along with his beard, surrounding a face full of crisscrossing lines that reminded her of parched earth. The man’s cracked lips moved, revealing crooked, stained teeth and gaps from teeth lost in his rough sea life. Ionna analyzed his posture and expressions. Was he threatening or kind?

Before she started her journey she had imagined the dangers for a woman traveling alone, but the past days had taught her how naïve she was.

And now, after a day and a half aboard the rocking ship, terrified to interact with these wild men, her thirst was formidable, cleaving her tongue to the dried husk of the roof of her mouth. She yearned for cool water to wash her parched throat. She had hoped for rain, but the faeries her people prayed to had not answered. At long last, in desperation, she had lapped at a puddle of seawater pooled on the deck. Her stomach retched and she spat out the bitter saltiness. The sailors had laughed at her with their hard, closed faces, violently contorted lips, and hungry eyes. She imagined their grasping hands—and she had found this spot to hide.

She looked warily toward the sailor. He was still there.

She slid farther away, her back connecting with the side of the ship.

He held something shaped like a small cup, nodded at it, then pointed his chin at her. His lips moved again. His eyes were dark like his skin, and they crinkled at the corners. Could she trust him?

This water might be the same as what she tasted before. Perhaps this man was tricking her, only to laugh as the others had done. Or he expected payment. Payment in coins she no longer possessed—or payment in terms rough men seemed to expect in this strange world.

She used to long for the mysteries of the world outside the forest. Now she wasn’t so sure.
The grizzled sailor held the cup to his lips and tipped his head back, then licked a drop of water from his lips. He winked one eye and set the vessel on the deck near the barrel she’d hidden behind, and took a step back.

She hesitantly grasped the cup, surprised at the material of its construction. Gray in color like the heavy clouds, cold like stone on her fingers, and somehow moist—as if the liquid inside had found a way through the cup’s very walls. Her worn, wooden cup at home in the forest seemed very far away. Her fingers identified bumps on the sides of the cup where it had been roughly handled. She peeked at the sailor. His storm-gray whiskers sprouted in all directions from weathered cheeks. Grizzle would be a good name for him, if he deserved a name.

Ionna took a deep breath, then a tentative sip. The water tasted flat and stale and faintly of oak. But not salty.

She started to gulp the rest, but a staying motion from ‘Grizzle’ reminded her to slow down.
She finished the last of the water and handed the cup back to Grizzle, with what she hoped was a grateful expression. He crinkled his eyes at her and moved his lips some more.  He passed the cup back to her, seeming to indicate it was hers. She slid it into a patch pocket on her skirt.

He brought her more water and a few pieces of hard cracker-like bread. Grizzle sat near her for hours. Through the heat of the sun poking between the clouds. Through the autumn leaf-colored rays as evening began. Through the apparent taunts of the other sailors, judging by their expressions and waving lips. He didn’t even seem bothered by the swirling tattoos beside her right eye. Apparently, women outside the forest wore no facial tattoos. How did they identify the differences between women?

Later, Grizzle showed her the wooden barrel where she could dip her own water, and she realized the reason for the oak flavor. Of course, there was no forest stream here in the midst of the briny sea.

Ionna stood to stretch her stiff legs, gripping the rail with one hand and the staff with the other and looking over the waves. Over the last few days, she had occasionally glimpsed an island or hint of land in the far distance. Too far away. A fear of falling from the ship and drowning in the bracken waves roiled her belly. No one else seemed to be plagued with the same apprehension. She longed to hold onto the mast—the only structure similar to the trees of her forest—rather than venture near the rail of the vessel. But that would keep her near the other sailors.

Grizzle stood at the rail a few feet away—far enough to seem non-threatening—whittling some bit of wood with a short blade. The creases in his fingers and his fingernails seemed permanently stained darker than his skin. He glanced over at her, his lips breaking into a lopsided smile, and she wondered if she dared listen for his thoughts. Just to see if she could hear him.

At home, her people spoke not with lips but mind to mind. They heard not with ears but within their spirit. But since she left Lika Forest, she had never dared to reach out with her mind to listen to what a stranger tried to communicate with their flapping lips.

Could she risk Grizzle’s awareness at what might seem like spying? Collect his thoughts before they poured out through his mouth?

She sent a tentative tendril of listening thought in his direction. Searching. Seeking. And then—the words smacked into her like a rogue wave. She was nearly bowled over by the intensity and volume of his thoughts, unlike the calm, steadiness of the men at home. She gripped the rail and staff tighter to still her mind.

…the sea be my mistress and I be hers.

His lips seemed to move along with his thoughts. She should watch these lip movements more.
Grizzle readjusted the smoky pipe now clenched between his blackened back teeth. He pointed his blade at the shining fish swimming alongside the ship, leaping from the water over one another’s backs.

Them be shad. Always show up when we pass through the channel. Means only two more days, if the sea stays calm.

Two days. She slid her hand down the surface of the intricately carved staff, every swirl and knob long since memorized. Did she have a chance to find the Traveler before he moved on? She felt a flush rise from her neck and hoped the loosened tendrils from her braid whipping about her face kept the sailor from noticing.

She closed her eyes and let Grizzle’s words trickle past her mind in a stream. She hadn’t realized how starved she was for communication, how lonely. It seemed impossible that only ten days had passed since she slipped away from home. Since she last mind-spoke with her family. Were they worried? Did they understand why she had to find the Traveler?

And ten long days where she had denied herself the temptation to seek out the words people spoke to her. Unsure and afraid, she relied only on hand gestures and expressions. And in return, most people treated her like the deaf-mute she was.

When Ionna had first stepped from the safety and familiarity of the forest and into the first tribe she met, her knees locked together and she could not have stirred, even if a swallow hole had opened beneath her feet. People moved everywhere, it seemed. Dressed in somber colors, so different from her colorful blouse and skirt, their patched and ragged clothes indicating hard workers who rarely took a moment to rest. Some pushed small carts or led animals that pulled conveyances loaded with dried grass or cut pieces of wood. Their hair was not only black like everyone in her tribe. She marveled to see the brown of tree trunks, the red of fox fur, the fawn color of a deer, and even a color like sunshine represented on their heads and beneath their hats and kerchiefs.

But most peculiar was the way they turned to one another. Opened their mouths. Lips twisted and smacked, tongues dancing inside. With each movement, their expressions changed. Somehow this tribe communicated in a way she had never seen. She had heard the tales from Petar, but they seemed impossible.

Despite her loneliness, her heart burned with purpose. She had never longed for the burden placed upon her in the forest, but finding Petar was different. She looked up at the sailors swarming over the rigging.

Grizzle’s thoughts invaded again. I know them sailors look like ants on honey, but they know what they’re about. Havin’ a purpose—I didn’t understand till I was taken from my home—there’s a satisfaction in that.

Ionna wanted to roll her eyes. Grizzle sounded like her grandmother. Her only purpose was finding Petar. Finding her place with him.

The wind picked up and the ship dipped into a trough between waves, sending spray into her face. She closed her eyes against the salty moisture, readjusting her grip on both the rail and the staff. But behind her eyelids, she saw the Traveler—Petar—his broad shoulders encased in a fitted deerskin shirt and dark leather vest, a worn oiled cape folded over his arm, and this very staff in his hand. His leather breeches tucked into knee-high boots, nicked and scratched from his many adventures. As she listened to his thoughts, he would shake his shaggy light-colored hair from his brown eyes, dispensing a favored nod or wink from time to time.

How many hours had she spent sitting around the fire with the others of her tribe—young and old—sitting at his feet, soaking in the stories of his travels around the world? Her tribe never left Lika Forest; all of them were hungry for a glimpse of places they would never see.

Petar told of people who spoke mouth to ear, and never with the mind. Of cities with untold thousands who lived, strangely, on the very ground. Of vast areas of sand with no trees, and untold expanses of water, where one could no longer see land. Each story seemed like a faerie tale. If only she could see if the stories were true.

And here she was, embarking on a journey much like the Traveler. If she found him, would he be proud of her? Grateful to be reunited with the staff he had left behind and the information she brought? Perhaps, just perhaps he would understand that she longed to keep him company on his search. Perhaps he would invite her to join him as a partner. A friend.

And perhaps even more.